Who: Tess Powers, Director of Faculty Research Support
Where: Colorado College
Number of years in research development: 8
Length of NORDP membership: 1
Number of NORDP conferences attended: 2017 will be my first one!
How do you unwind? Dancing

I attended Bryn Mawr College, a small liberal arts college outside of Philadelphia and one of the “Seven Sisters” women’s colleges. I wanted a career that involved writing. Thinking of perhaps a career as a science journalist, I decided to major in chemistry so that I would have a rigorous foundational understanding of one of the sciences. 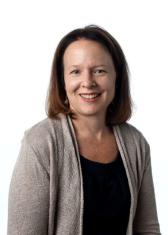 After graduating, I attended a federal program called “Science and Engineering Research Semester” (SERS), which appears to now be defunct, where I, with many other recent graduates, conducted a semester of research at a national laboratory in order to determine whether I wanted to pursue a PhD. From this research experience I learned several important life lessons, one of which was that I like to work in draft form: Do something quickly, and perhaps badly, and then go back and do it better, again and again. I found that conducting good science is not particularly amenable to this approach.

I moved to Colorado Springs with a fellow SERS researcher, now my husband, and began working at the local alternative newsweekly. Over six years, I rose from receptionist to Managing Editor. I discovered that I loved managing projects and meeting deadlines. I also developed an appreciation for the Colorado Springs community, which was interesting and diverse in large part due to the presence of Colorado College, a small liberal arts college with a student body of approximately 2000 students.

I began my career at Colorado College in Development, as Assistant Director in the Corporate and Foundation Relations Office. I had neither grant-writing experience nor experience in philanthropy, but the College was willing to take a risk with me. My first assignment was to write a three-page letter, requesting $3 million. It wasn’t funded, but it was a powerful introduction to my new career: Writing a letter could produce dramatic and tangible results.

After so many years aiming for impartiality at the newsweekly, I found it meaningful to write with a perspective and an argument. I began to develop relationships with a number of faculty across the College, individuals involved in interesting projects and research. As the College didn’t have an Office of Sponsored Research, the CFR office became the central office for supporting faculty research grants. I began to learn the distinctions between research grants and philanthropic grants, not realizing that I had begun a career in research administration.

After five-plus years in Development, I moved over to the “academic side” and, for the last eight years, have staffed a one-person “office” supporting the research of approximately 170 faculty in the Office of the Dean. I work with faculty in all divisions, on the pre-award side and the post-award side, and oversee research compliance matters. During the last decade, the College has experienced a significant shift in the culture of grant-seeking. We’ve moved from supporting two or three faculty applications annually to about 20, with many more faculty engaging in research development activities that move them closer to being competitive for external funding.

I have been hearing about NORDP from a professional list-serve, particularly my co-presenter Kendra Mingo from Willamette University, and I am very interested in learning more about it. This will be my first NORDP conference, and I’m very much looking forward to it.

We hope to see you at the 2017 NORDP Research Development Conference, which will be held May 8-10 in Denver, CO. For more information about the conference program or to register, visit http://www.nordp.org/conferences. Follow @NORDP_official on Twitter for all the latest #NORDP2017 updates.

If you’d like to be featured in a Conference Cameo, let us know at rdconf@nordp.org.